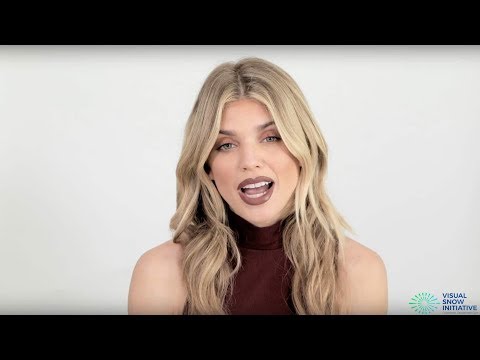 Raised by 1 person in 2 years

Visual Snow - What is it?

Visual snow syndrome is an untreatable neurological disease that devastatingly affects a person's vision, hearing, thinking, and physical body. Many of the symptoms a patient experiences are constant and do not come and go. Symptoms vary from patient to patient, but all patients with visual snow syndrome see static (similar to bad TV reception) everywhere they look.

My Story (Jen Ambrose, founder of the Eye on Vision Foundation)

My visual snow story started around the age of 6. I was young, so I'm not exactly sure if I was 5 or 6, but I clearly remember going to my mom in first grade and asking her what the flying dots I was seeing in the dark were. She thought I was talking about floaters, told me it was normal, and that was the end of that. Two years later my teacher contacted my mom telling her that I was having trouble seeing in school. My mom took me to the eye doctor and we learned that I was legally blind. Fortunately I was able to be corrected with glasses, but the doctor seemed baffled how this could have gone missed. Looking back now I wonder if the start of my visual snow two years prior had something to do with it. In 2005 my visual snow progressed to the full blown syndrome. I was experiencing worsening visual acuity, floaters, after images, loss of contrast sensitivity, ghosting, glare, halos, starbursts, tingling and numbness in my body. I was hospitalized and had every test run that was available and no doctor anywhere could figure out what was wrong with me. I was sent home time and time again from tests with doctors confused and questioning what was wrong with me. After many months of research on my own I came to realize that I had a little known condition called visual snow. Sadly, there was no research being done for the condition, so I started a non-profit and went on a quest to find a cure. In 2011, I was contacted by a visual snow patient whose neurologist was interested in researching visual snow. The research began in 2012. In 2014, my visual snow syndrome progressed again with worsening symptoms and new symptoms of tinnitus, head and ear pressure, trails, night blindness, along with another regression of my visual acuity (the eye chart test) and the development of more floaters. Then I underwent another worsening in 2016. There is not enough known about visual snow, so we do not know how much is reversible and treatable and how much is permanent damage. The changes that some patients have experienced to the eye itself are permanent (visual acuity loss and floaters). The changes to the brain are hopefully reversible. Time is crucial to this research. Myself, and many others like me, are counting on you to donate to the cause or share this story so that we can live our lives like we want to. Simple pleasures like going to the beach, reading a book, going for a Sunday drive or watching the sunset are too visually taxing for many sufferers.

Because so little is known about visual snow there is no official documentation on whether this is a genetic condition or not. Nothing official, but sadly we have conducted our own surveys, and yes, the responses are too overwhelming to ignore. There is a genetic link to visual snow. Many of us living with the condition, who are parents already, are terrified that we have passed this along to our children. Then there are those who haven't had children yet who are too scared to in fear of passing along the condition. More and more parents, and even the children themselves, are joining the support group for visual snow on a weekly, sometimes daily basis. We see young kids coming scared, looking for answers, and treatment, that can't be offered to them.

Changes in vision include: seeing television-like static across the entire visual field 24 hours a day, 7 days a week - even with your eyes closed (visual snow) seeing millions of silver specks flashing and moving everywhere in the sky and bright surfaces (entopic phenomenon) looking at your hand, and then looking away and still seeing your hand for several seconds even though you are no longer looking at it (after images) seeing the vitreous inside your eye breaking down with gray, black and clear cobwebs, clouds, spots and strands (floaters) colors fade away (low contrast sensitivity) looking at a sentence and seeing the same words you are reading floating on top of the text you are looking at (ghosting) seeing a moving object's motion after it passes your eyes (trails)

Changes in hearing include: constant ear pressure (this would be the feeling of needing to pop your ears on an airplane) and ringing of the ears (tinnitus) Changes in thinking and the brain: migraines,a feeling of watching oneself act, while having no control over a situation (depersonalization), a sensation that the world seems unreal (derealization)

Changes in the body: numbness, tingling, twitching, vertigo and dizziness

Visual Snow affects a person's vision 24/7 — there is no relief from it, even when one closes their eyes. Without warning or cause, people with Visual Snow see the world in an overlay of hundreds of tiny moving dots across their field of vision, as well as other disturbing images.  Unfortunately, there is not yet an evidence-based treatment or cure for Visual Snow. Nobody knows the cause.  This is why I am compelled to help.

The Visual Snow Initiative, founded by Sierra Domb, was established to increase awareness for Visual Snow, build a community for those who suffer from Visual Snow, and to generate the capital necessary for research and medical advancements.  Join my team today or donate to help me raise much-needed funds for Visual Snow research. Together we will find a cure!  The Visual Snow Initiative is a public charity under the fiscal sponsorship of the Edward Charles Foundation, a non-profit 501(c)(3) organization, EIN# 26-4245043. All donations are tax deductible to the extent allowed by law.

More importantly, 100% of donations will go directly towards advancement of the Visual Snow Global Research Fund.

Share your unique campaign link to see how much your shares help.

Raised by 1 person in 2 years